The Ford GT is arguably the most desirable model Ford have ever created with it’s history dating back to the iconic GT40 racing car from the 1960s which are now fetching quite ludicrous sums of money on the classic car market.

It’s spiritual successor built during 2005 and 2006 has become a modern classic and having sold a few in the past, ( view a selection our Ford GT’s for sale here ) we along with the rest of the automotive industry are very excited to hear the news that Ford will be producing a brand new Ford GT which will be coming to the market to celebrate Ford’s 50th anniversary of dominance at the 1966 Le Mans 24 Hours. 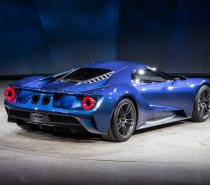 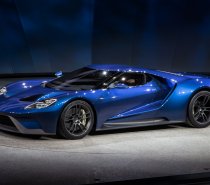 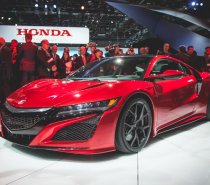 So why has the new Ford GT got the car industry so excited?

The new Ford GT has stolen all of the headlines at this year’s 2015 Detroit Motor Show which opened its doors to the public on the 12th of January and runs until the 25th of January and welcomes on average over 100,000 visitors a day and is considered the most important motor show in the USA.

The car’s new radical engine has been the talk of the town, gone are the days of that visceral supercharged V8 engine that Romans and the world grew to love, and instead comes a brand new economical Ecoboost engine. Shocked? Yes, we were too.

However, hold your judgement, as Ford has developed a brand new twin-turbo 3.5 litre V6 engine which makes over 600 BHP to the rear wheels via a seven speed dual clutch gearbox. 0-62mph is estimated to be around three seconds with a top-speed over 200mph. Furthermore, with the car rumoured to have a very lightweight carbon fibre construction just like the McLaren 650S, active aero just like the Ferrari 458 Speciale, and a chassis designed ultimately for performance just like the Porsche 911 GT3, Ford claim the “GT will have one of the best power to weight ratios of any car on the market”.

With beautiful flairs, curves, wings, sharp and rounded edges all over the car, the styling of the new GT is a masterpiece. They have cleverly managed to make the GT look ultra-modern and yet still have subtle hints that remind you of its illustrious predecessors.  The car sits low and wide to the ground with big carbon fibre ceramic brakes and elegant 20 inch wheels. Upward swinging doors and a minimalistic interior complete the package, which promises to make this an outstanding world beating supercar. Production will begin late next year and will be available to the global public.

What have the other highlights been at the Detroit Motor Show?

With over 750 new cars and trucks on display as well as 55 product premieres, another supercar that stole the show was the Honda-owned Acura NSX. This car has the same hybrid recipe as the McLaren P1, Ferrari LaFerrari and Porsche 918 Spyder, but the car will be competing with the likes of the Audi R8 V10 Plus, BMW i8, Porsche 911 Turbo and the Tesla Model S.  With production beginning this year, the long awaited successor of the original Honda NSX sports car will have a mid-mounted V6 petrol engine alongside three electric motors via a nine speed dual clutch gearbox.

With the electric motors powering the front wheels and the petrol engine powering the rear wheels making this car four wheel drive, the power output is rumoured to be over 550bhp. Coincidentally, with Honda being back in F1 this year aswell, the NSX’s production has been timed to perfection not mentioning that the car has similar technological concepts as their F1 engine. It’s clear that this year Honda are here to be taken seriously in the supercar game, and we definitely look forward to seeing the new NSX on UK roads this year.

There have also been plenty of awards given-out at the COBO Center in Detroit, with not only Ford’s GT picking up accolades, but the car manufacturer also saw its F-150 pick up the “Most Innovative” prize and the “Most Awesome Off-Road vehicle” award for its F-150 AVT Raptor pickup.

The evergreen Mercedes car company picked up the “Best Future Fantasy” award for its F 015 model and the Bentley Mulsanne was voted the “Most Luxurious” vehicle at the show.

The Fiat Chrysler won the “Best Family Hauler” award for its Town and Country minivan and “Best Value” vehicle for its Dodge Dart, while General Motors Corp.’s Chevrolet was awarded the “Most Earth-Friendly” prize for the Volt and “Sexiest Vehicle” for the Corvette Z06.