Fancy buying some shares in Ferrari?

Recently Fiat-Chrysler Automobiles, Ferrari’s parent company, floated the Italian luxury car manufacturer on the stock market for the very first time. This is a big step for Ferrari who have been hugely successful over recent years with their road cars. Whether this success translates onto the US stock market where Ferrari shares are openly available for the public to buy is somewhat unknown at this stage but one thing is for sure this is a very interesting time for the Ferrari brand and the first signs are not great! 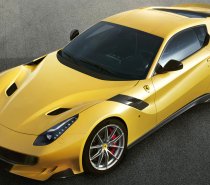 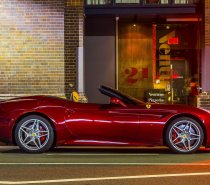 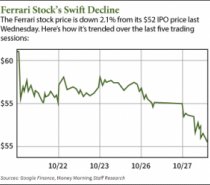 At 9.30 EDT, on Wednesday 21st October, Ferrari Chairman Sergio Marchionne rang the opening bell at the New York Stock Exchange to mark the start of trading on the floor. He was accompanied by Fiat-Chrysler Chairman John Elkann and a number of Ferrari executives, including Enzo Ferrari’s son Piero.

Ferrari’s stock floated with an IPO (Initial Public Offering) of $52 but on the first day of trading the shares ended up reaching around $60 (£39) each, a whole 15% higher than predicted.

With only 10% of Ferrari actually on offer to the public, this puts the brand at a value of around $11.3bn (£7.36bn). The majority shareholder with 80%, Fiat-Chrysler Automobiles, who also own Alfa Romeo and Maserati, is said to have raised $893 million by this flotation.

A week on, Ferrari’s shares have significantly dipped back to around $50 meaning early investors are already losing money and although in general stock markets across the world are a bit shaky this is still disappointing news for Ferrari.

What’s ahead for Ferrari?

Ferrari produces around 7,000 cars a year, with a base price starting at around £150,000, the California T the entry level Ferrari. Some sceptics are saying that now Ferrari is a public company, they may be held to growth targets set by investors and analysts. This would mean they may end up producing much more cars in order to hit these targets, which would in turn kill the exclusivity factor. Another way of hitting these targets would be to simply sell the same number of cars, but at a much higher price which will not sit well with loyal customers.

Luca di Montezemolo, a former Ferrari Chairman, expressed his concerns about the situation in August this year, when he spoke at his introduction into the Automotive Hall of Fame in Detroit. He said: “I hope that the client will remain the most important point of reference. Because if not, it will be a big mistake. Because, I always say, ‘our people, our products, our clients.’ These are the key elements.”

The Italian manufacturer’s brand relies heavily on the loyalty of its customers. This is clear when you take into account the fact that in 2014, around 60% of all new Ferraris were sold to existing Ferrari owners. Combine this with the fact that 34% of Ferrari owners, have more than one Ferrari car, and there is potential to leave a large percentage of customers disgruntled.

However, on a more positive note, some observers in Italy have said that some of the profits made from the sales of shares will be invested into the F1 team. Ferrari has fallen somewhat by the wayside in recent years and Marchionne is keen to see the F1 team turned around as soon as possible. This will be music to the ears of Ferrari F1 fans, who have seen Mercedes outperform the Italians since the move to hybrid turbo engines.

In our opinion I think you are better off buying the cars rather than the stock, in particular the limited edition Ferrari’s which should yield a much stronger return on investment.

In other Ferrari news, the Italian manufacturer has just announced the brand new limited edition Ferrari F12 Tour de France (TDF); which is a 769bhp light track focused F12 that pays homage to the classic French road race of the 1950s and 60s. They will be debuting this car to the public at Mugello on Sunday 8th of November and deliveries are set to start in 2016 with 799 cars available worldwide, most if not all of which have been allocated to the Ferrari’s best customers.