Can’t afford a GT3? Well here is the answer: The Cayman GT4

Emotion, Involvement, Communicative, Connection, Purist and Fun. These words were the inspirational metaphors behind the newly unveiled Porsche Cayman GT4; one of the most hotly anticipated performance cars of the year.

Developed by the same team who brought us the hugely successful 991 GT3 for sale, it is thought that the Cayman GT4 is the car to maximize the potential of the Cayman’s excellent mid-engine chassis. Many were under the impression that the Stuttgart-based marque was holding back on the true performance potential of the Cayman in the past, to avoid upstaging the 911, but the GT4 looks set to finally change those opinions. In terms of performance, the power is provided by a 3.8L flat-six 911 Carrera S engine tuned by the Porsche Motor Sport division to provide 385bhp and 310lb ft of torque. 0-62mph is dealt in 4.4 seconds and the top speed is 183mph. This phenomenal performance is transferred through a 6-speed manual gearbox only from the Cayman GTS. Yes a manual gearbox only! This is a welcome change to what was fast becoming the era of turbo-charged engines and paddle shift gearboxes – Porsche has listened to the hardcore enthusiasts out there who still favour the manual stick and to those who felt the lack of manual option in the GT3 was verging on blasphemy. This car is for those people (and the people that couldn’t order/afford a GT3). But we must say it’s a great looking car and we trust Porsche to make something very special here. 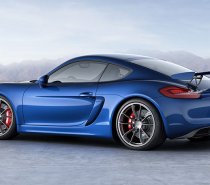 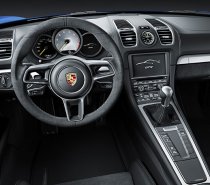 The chassis of this GT4 is what makes this car stand out from all other Caymans, this is because many parts have been borrowed from the GT3 such as the front suspension, 245-section front tyres, brakes set up with Carbon Ceramic brakes being an option and the same level of aerodynamic downforce (100kg) at top speed to be precise. Only differences between the Cayman and the GT3 are that the rear is almost completely new, with a mechanical limited-slip differential and the absence of rear-wheel steering functionality on the GT4. A great deal of work has also gone into the revamping of the electric steering system, which is said to offer even more feel and precision in comparison to the GT3.

All of these changes have proved significant as Porsche have claimed the GT4 to have completed the 3.19m lap of the legendary Nürburgring in just 7 minutes and 40 seconds which to put into perspective is the same lap time as the mighty McLaren SLR, Lamborghini Murcielago LP640 and quicker than the Audi R8 V10, Mercedes CLK Black Series, Lamborghini Gallardo Superleggera and BMW M3 GTS.

Finally there’s the price to consider, and despite the power, performance and GT3 underpinnings that the GT4 offers, it’s some bargain with Porsche dealers set to ask their customers for £64,451 before extras. Being £35,000 cheaper than the 911 GT3 and £20,000 less than the 911 Carrera S, there is bound to be plenty of orders for this one.