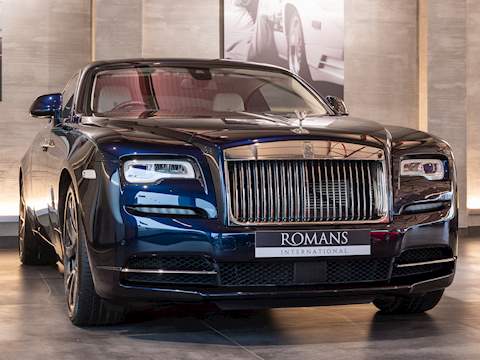 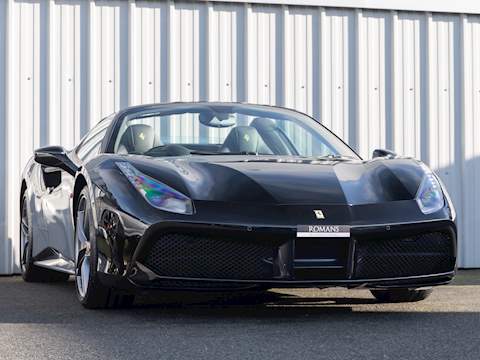 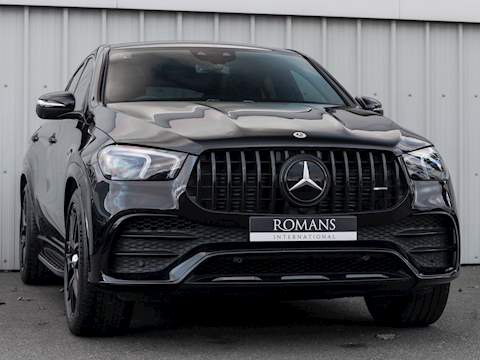 This is the 911 Turbo S Exclusive Series, it’s a limited-edition car that came out last year in 2018 and it’s the work of the department called Porsche Exclusive Manufaktur. There are a specialist division in Porsche, who have created the 997 Sport Classic and 997 Speedster; really individual bespoke small run limited production cars. Now its easy to say that this is just a Turbo S with a few bits on, but until you look at this thing in some serious details, you’ll never quite appreciate how special this car is. We believe it could well be the most collectible 911 of the 991 series and here’s why.

First up we want to talk about its rarity. There are 500 examples worldwide and we believe there are only 29 UK supplied cars, so it is a really rare car. What’s important is that each car is individually plaqued, so we know that this is number 223 of 500 cars. When it comes to collectability that is really a big factor, there are a lot of limited-edition cars these days and a vast majority of them do not have an individually plaqued number. Most of them you don’t even know how many there are. No Ferrari, no Lamborghini has an individually plaqued number unique to that car, so it’s a really big factor.

Other Porsches that have an individual plaque include the 911 50th Anniversary Edition, but there are 1,963 of those. You have the 911 R of which they are 991 of those and you also will have the 991 Speedster but they will be 1,948 of those; so the Turbo S Exclusive is substantially rarer than all of these. It’s also rarer than the GT cars as well, from the GT3 RS we reckon there’s probably two or three thousand of them, even the GT2 RS we reckon there’s a thousand of those worldwide; so the Turbo S when it comes to rarity, is the best of the 991 series you can get. When it comes to collectability, rarity is one of the most important factors. 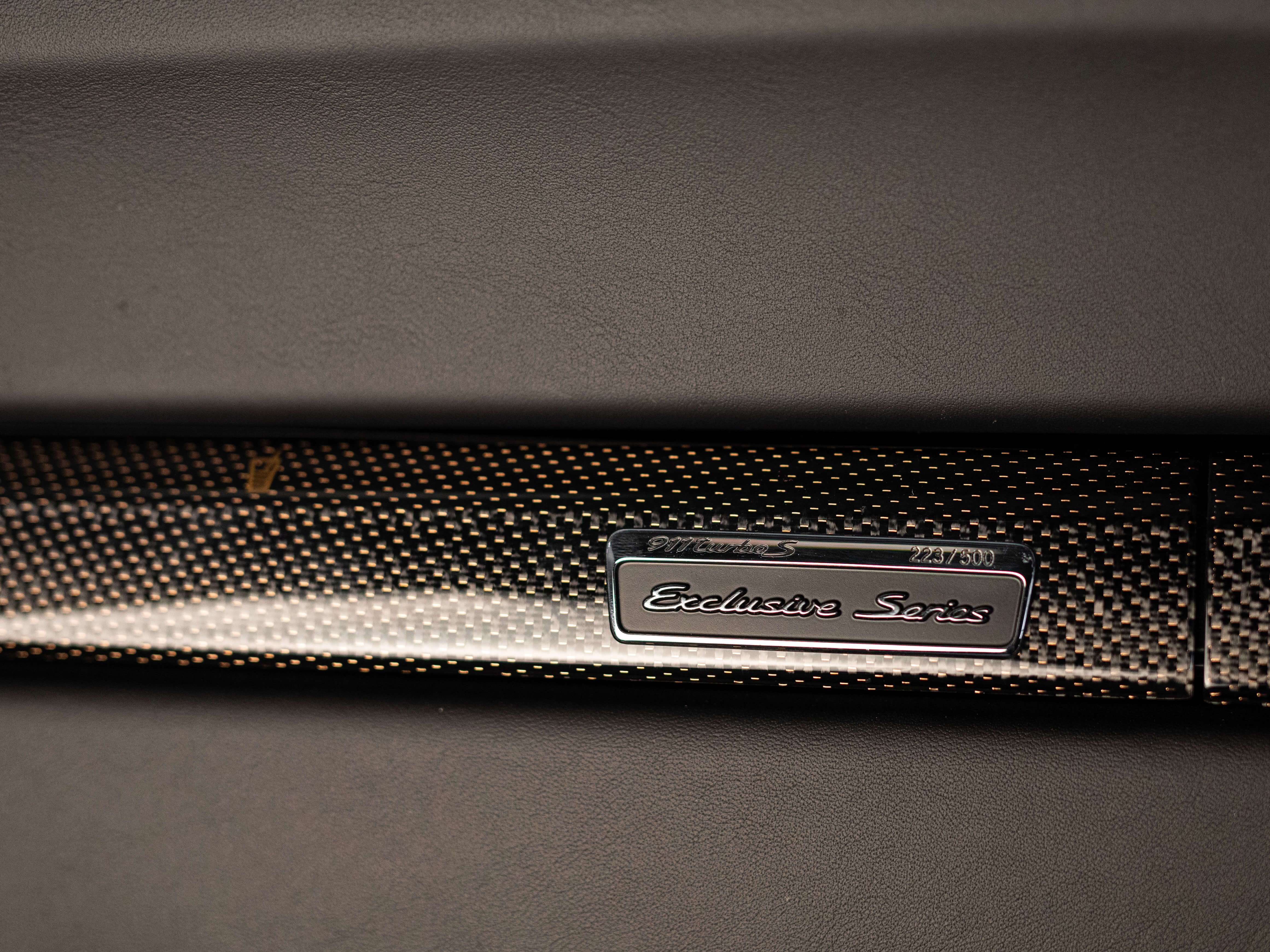 There are 3 main colours you could choose on the Turbo S Exclusive, you can have Agate Grey which makes the car look a lot subtler and you can choose Carrara White which is a colour we’ve yet to come across. The clear, more obvious colour choice for this car and how it’s meant to be is this Golden Yellow Metallic. We first saw this car on a special one-off car that Porsche created for a charity auction. It was called Project Gold based on a 993 Turbo S and it was put into auction expecting to make £300,000 or £400,000. It ended up making £2,500,000. It’s a nice little note and its kind of inspired this car

But what’s really important about this colour is you cannot actually spec it on any other Porsche. Obviously you can get Agate Grey and Carrara White which you can pick on any other Porsche but this colour is unique to this car and obviously that special one-off 993 Turbo S. What’s also important is that this gold theme carries throughout the car, so you’ve got gold on the wheels, badging and throughout the interior. So, it does make a lot of sense to choose this colour. Finally, we also think it adds extra value on the car.

One more Carbon Fibre feature that’s worth noting is on the interior. You might have noticed a slightly gold tint on some of the interior Carbon Fibre and what it actually is, is a golden metal thread which is interwoven with the Carbon Fibre. It’s on the door trims, dashboard and on the centre console. It’s something we’ve never seen before on a Porsche so again it’s unique and bespoke to this car which in turn just makes it more collectible.


Unique special touches is what defines the 911 Turbo S Exclusive Series. Starting with the wheels, this is a new alloy design that hasn’t been on any Porsche previously. First off, you’ll notice the Gold edges and the production process to get this effect is very fascinating. Initially, they paint the wheel completely Gold to start off with and then they do a second layer of gloss black. Following this, they are put into a lab where they are lasered out to make this edge. A very cool way of making these alloys, totally unique to the Turbo S Exclusive Series. Moreover, behind the stunning wheels you’ll notice the calipers and Carbon Ceramic brakes. On any other Porsche, if you have Carbon Ceramic brakes you’ll have Yellow brake calipers but on the Turbo S Exclusive it comes with Black brake calipers which also have the Gold Porsche logo through the middle so again something different, something unique to this car.

Another unique feature to this car is the exhaust. On a normal Turbo S you get a more rectangular shaped exhaust but on the Turbo S Exclusive you have this jewel circular exhaust which also has this rifle style edging too which is very cool.

Stepping into the interior, the unique touches from the guys at Porsche Exclusive Manufaktur proves they are real craftsmen. They’ve done so many fantastic things starting with the key. Firstly, you get the Gold key to match the exterior paint. Secondly, you notice the Gold stitching, which is threaded perfectly throughout. It’s on the seats, headrests, dashboard, door trims and even on the floor mats; so it really brings the interior to life. The other theme that continues from the outside with the Carbon Fibre stripes, is the stripes coming through the interior on the seats which are perforated with the little gold tint behind. On the Alcantara roof lining, you get two perforated gold stripes. Finally, you notice a further two stripes on the rev counter, so you’re always reminded that you’re in a special car. 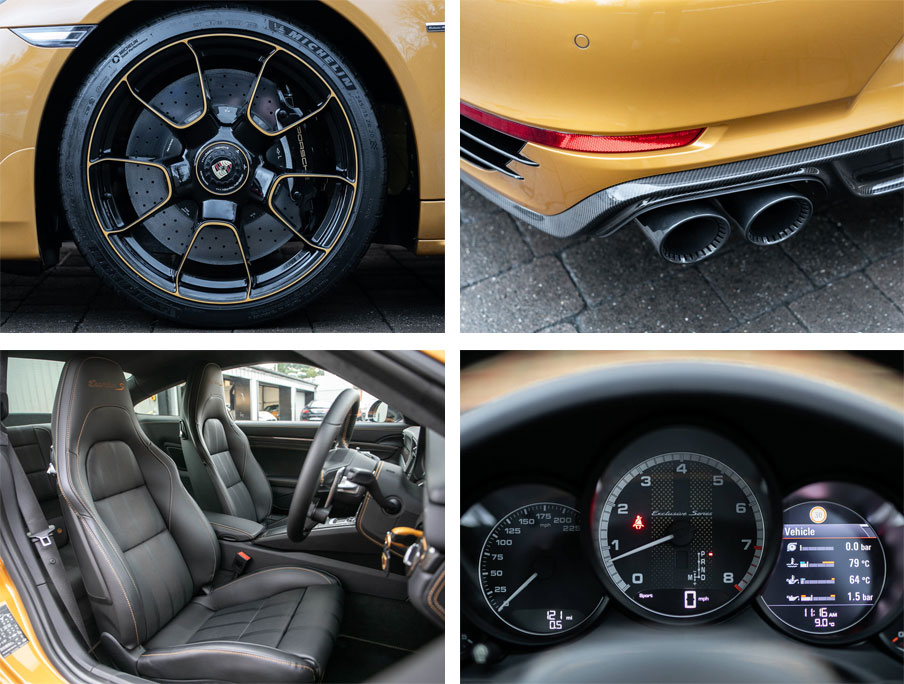 The final piece that completes the 911 Turbo S Exclusive’s collectability is this collector’s piece here. It’s one thing having a collectible car, its another thing having a collectible matching watch to go with it. This was an £8,000 option which you could spec with the car, but not everyone went for it. You get a matching watch with the Gold stripe through the middle. It’s a Porsche time piece that comes with special straps to go with it which again have the Gold stitching carrying on the theme from the interior. Whether you choose to wear the watch or not, there’s no denying that this lovely presented watch adds value and collectability of the car.

There you have it, the 911 Turbo S Exclusive Series, a real work of art. Is it the most collectible 911 of the 991 series? Some people might point towards the 911R, but what we would say is that the Turbo S Exclusive is rarer, faster than the 911R and it did cost £50,000 more from new. Some people might say the GT2 RS, but that is not a limited number car. What’s nice about this car is that it’s not a track focused hardcore variant, you can use this every day. It might just be the most exclusive everyday car in the world.

Check out the full video on 5 Reasons Why The 911 (991) Turbo S Exclusive Series Is So Collectible here :