The glamour and class of Salon Privé rolled back into London last week, marking the return of the most exclusive event on the motoring calendar. Held at Syon House in West London from the  3rd of September to the 5th of September, the event brought some of the rarest, fastest and most expensive vehicles from around the world to the UK capital, some of which debut in the public eye for the very first time.

Romans International have been attending this event for the last 8 years and have found it to be a fantastic occasion to showcase some of the companies most beautiful and rare cars to potential clients. This year was no exception as Romans International took the stunning Alfa Romeo 8C Spider, the Porsche 911 (991) GT3 and the 2014 Range Rover 4.4 SDV8 Autobiography LWB. With main dealer manufactures like Ferrari, Lamborghini and Maserati showcasing at the event, it was important that Romans International took cars that stood out and were unique to other exhibitors. Our selection of cars proved successful as the Range Rover LWB immediately received enquiries which eventually led to a sale shortly after. 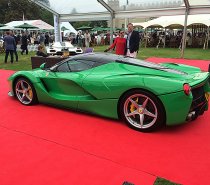 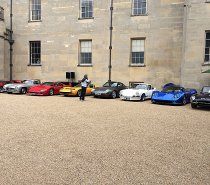 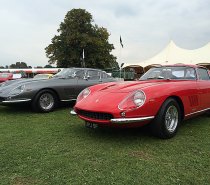 The meeting kicked off with the Concours d’Elégance, an event which showcased some of the world’s most important, rare and valuable classic cars. Stand out winners included the 1954 Jaguar D-Type that took the crown of ‘Best of Show’.  There was also a celebration of 50years of the Ferrari 275 in which a yellow 1967 275 GTB/4 took the crown.

One of Romans International’s favourite displays included Jay Kay’s dramatic green Ferrari La Ferrari. It was the star of the show in our opinion and proved to be a worthy successor of the illustrious Ferrari Enzo. We at Romans International are a renowned Ferrari Enzo dealer and are looking forward to having the La Ferrari in our showroom in the near future. We loved the La Ferrari’s accentuated scoops, ducts, and aggressive lines that really epitomised what a Ferrari should really be about; a slice of Italy’s finest sculptured moving art.  It is a model that fantastically combines all of Ferraris Formula 1 racing technology and heritage into one phenomenal package.  Some at the show even suggested that the car had subtle design queues that marked back to the Enzo, F50 and F40 but that’s for you to judge. We at Romans International are proud to have stocked all of the modern Ferrari flagship cars and we hope that the La Ferrari is no exception.

Range Rover among those under the hammer

With the second day being Ladies day, the other main occasion was the inaugural Salon Privé Sale. Our stand out performer at the auction was the 1970 Range Rover chassis #001 which sold for £132,250. Romans International are one of the UK’s leading independent Range Rover dealers and we were stunned at the immaculate condition of the 1970 auction car.

One of the most anticipated lots which failed to sell was the ‘Stradale Collection’, an assembly of 16 stunning supercars and rare vehicles including a 1971 Ferrari 365GTS/4 Daytona Spyder, a Ferrari F50 and a 1931 Bentley 4.5 Litre Blower – the latter being one of just 50 vehicles ever to go into production.

Among the famous faces in attendance at the auctions was Chris Evans, with the renowned presenter seeing off all competition to take home the 1971 Daytona from the Stradale Collection, paying £2,277,000 for the privilege. Just one of 122 models ever built and with just shy of 4,000 miles on the clock, it’s hardly surprising that it was given an estimate price of £1,750,000-£2,250,000.

Although the event has now drawn to a close, the overwhelming success of the event means that people are likely to be already waiting in anticipation for the 2015 instalment.