McLaren Automotive are on a bit of a roll at the moment, bearing in mind a month ago at the Geneva Motor Show we saw the live launch of their 675 LT, a track focused Ferrari 458 speciale rival limited to only 500 units worldwide, the mind boggling hypercar P1 GTR and now this: the 570s Coupe. This should not come as a surprise to many of you as this is part of McLaren’s three model growth strategy that integrates the McLaren’s Sports Series, Super Series and Ultimate Series. The company expects to be hitting a production output of around 4,000 cars a year as a result of this strategy with the arrival of the 570s Coupe and other cars in their range. McLaren say this car is a game changer in its segment, as it delivers McLaren DNA to a new customer base. 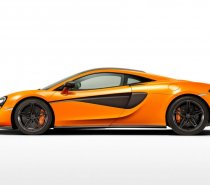 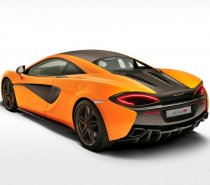 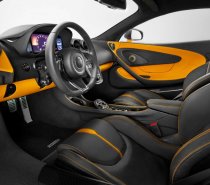 So what is this 570s Coupe all about?

Powered by the same 3.8 Litre Twin-Turbo V8 found in its bigger brothers the 650S and the P1, the 570s will produce 562BHP (570PS hence the car’s name) and 443lb ft of torque via a 7 speed dual clutch gearbox. 0-62mph will be dealt within 3.2 seconds and reach a top speed of 204mph. These are sensational performance figures but one of the more impressive statistics is the cars light weight construction. The 570s weighs just 1,313kg which is all down to McLaren’s new carbon fibre MonoCell II chassis design, which is an improvement on the one used in the 650s. Impressively the whole cars structure weighs less than 80kg which subsequently contributes to the car having a class leading power to weight ratio of 428bhp per tonne.

With regards to styling, there’s no denying the car has the current McLaren family design DNA with the P1 inspired LED Front and rear lights. However that’s where the similarities end as the 570s shares no other panels with other McLaren models. It has unique aerodynamic styling cues such as the front aerodynamic blades, fixed rear wing rather than active as on the 650s, bespoke side skirts and rear diffuser. The car also features door tendons inspired by the P1 that channel cool air into the engine. Strangely the 570s is altogether a larger vehicle than the 650s being both wider and larger than it’s more expensive sibling.

The 570s cabin is significantly different from McLaren’s other models as key features include an increased class leading storage capacity of 144 litres, leather upholstery, infotainment system mounted on a floating centre console, 7inch touchscreen including satellite navigation and a 4 speaker McLaren Audio system.

How does the 570s compare to rivals Porsche and Audi?

The Porsche 911 Turbo S will be one of the 570s’ biggest competitors with 552bhp and 516lf of torque from its 3.8 litre twin turbo flat six. Although the Porsche wins in a battle of top trumps in a 0-62mph battle by 0.1seconds against the baby McLaren, however its worth congratulating the boys at Woking as the 570s runs the Turbo close bearing in mind their car is rear wheel drive and its mid-engine rather than rear engined which aid the Porsche’s traction advantage. Furthermore, up to 124mph the McLaren beats the Porsche as the Turbo S takes 10.3 seconds to hit 124mph whereas the 570s does it in 9.5 seconds and the Turbo will top out at 194mph which is 10mph less than the McLaren.

In comparison to the Audi R8 V10 Plus, the McLaren is down 39bhp as the Audi has 601bhp and 413lb ft of torque from its big 5.2 litre naturally aspirated engine. Even so the Audi only matches the McLaren to 62mph, is 0.4seconds slower to 124mph but the Audi can top out at 205mph which is 1 mph quicker than the McLaren. Rest assured, we cannot wait to see these three head to head on a track to see who is king.

Prices of the McLaren will start of £140,500 and will go on sale after its public debut at the upcoming New York Motor Show. For the time being, we just have to wait until the motor show to see more detailed pictures and information on this stunning car.