Limited to only 500 examples worldwide, the 675LT is a lightweight, track focused and more powerful Limited Edition variant of the stunning 650S. Already being complimented as the baby P1, the LT stands for longtail which is a tribute to McLaren’s legendary 1997 F1 GTR longtail endurance race cars which were longer, lighter and faster much like this new car.

Following criticism from journalists that McLaren’s road cars need more emotion, rawness, noise, driver engagement and fun at the limit; McLaren have responded to their critics with this car. This vehicle is aimed to be the 458 Speciale rival and promises to be just as exciting as the Maranello car. 33% of the whole car is new in comparison with the 650S and in particular, 50% of the engines components have been replaced. The 3.8 litre twin-turbo V8 now produces an extra 25bhp raising the total output to a staggering 666bhp (675ps hence the cars name). Torque has increased by 16lb ft to 516lb ft of torque which means 0 to 62 mph is dealt within 2.9 seconds and will reach a top speed of 205 mph. We at Romans International await this vehicle with anticipation… 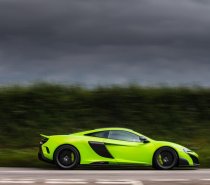 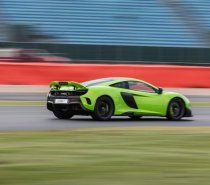 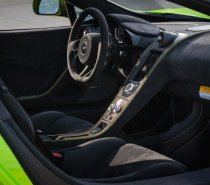 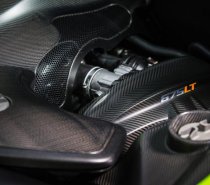 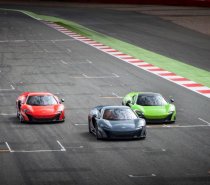 Some of the McLaren Hero Specifications 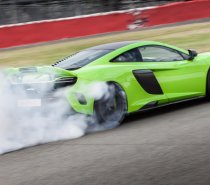 675LT Happy to do Burnouts

Weighting an impressive 1230kg dry, the LT is 100kg lighter than the 650S. This is the result of extreme weight saving measures such as lightening the wiring looms by 3kg, 11% lighter conrods, titanium wheel nuts, 0.5mm thinner windscreen glass and a polycarbonate engine cover.

McLaren have really worked their magic on the chassis as the suspension features new and lighter springs all round with front spring rates now being 27% stiffer and 60% stiffer at the rear, front and rear track have been widened by 20mm and the ride height has been reduced by 20mm. Furthermore, the car’s wishbones and uprights are derived from the P1 and more astoundingly the steering rack is now faster than the P1.

Aerodynamically, the 675LT is 3cm longer than the 650S, has a new carbon fibre front splitter, new front wing end plates, sculpted carbon fibre side sills, enlarged door blade intakes, 50% larger and more effective rear wing and new underbody. All of these incremental changes are all in carbon fibre and ultimately results in 40% more downforce than the 650S.

Step inside the driver focused 675LT cabin, and you can really see McLaren’s relentless effort to save weight. The car comes as standard with a pair of ultra-lightweight carbon fibre shelled bucket seats in alcantara such as those seen on the P1, new shift paddles, a titanium roll cage and harness which can be optioned as part of the clubsport package. The air-conditioning controls have also been moved from the door panels and are now integrated within the Iris system to save weight. Furthermore, the LT is offered in five McLaren hero specifications which include four bespoke exterior colours Silica White, Delta Red, Napier Green and Chicane Grey and the heritage McLaren orange which completes the themes.

The 675LT has been praised as more rewarding, agile and responsive to drive. McLaren has added more emotion to the driving experience and for example the car has a launch mode that will make you perform big long burnouts. The engine’s soundtrack is more satisfying than ever before especially with the new lightweight two circular titanium exhaust. It’s all about the detail and hence it’s closer in lap time to a P1 than a 650S around most tracks. The 675LT costs from £259,500 and all of these cars have been sold but if you are ever lucky enough to see one on the road, it’s guaranteed to leave a long lasting impression on you.