Bentley unveil their most extreme road car ever – the GT3-R

Bentley have unveiled details on the new Continental GT3-R, a model which looks to become the fastest road car in the history of the luxury automaker.

Using the famous Goodwood Festival of Speed to lift the lid on the much-anticipated model, the firm have stated that just 300 models will be made available at Bentley dealers at a price which is yet to be confirmed. It is set to arrive at the end of 2014 and, however much it costs, the order book is certain to fill up very quickly. 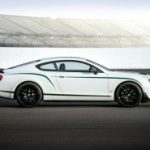 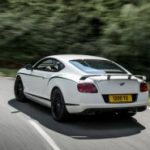 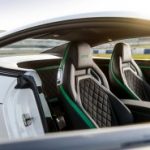 First unveiled back in 2003, the Continental is one of the biggest successes for Bentley and saw the marque use mass production manufacturing techniques for the first time; its huge success ultimately helped to transform Bentley into a global brand.

Strictly a two-seater and based on the world-famous Continental, the GT3-R is powered by the familiar 4.0L twin-turbo V8, although this has now been retuned to offer an incredible 572bhp and 516lb ft of torque from just 1700rpm. Bentley claim that this added burst of power helps the model to rocket from 0 to 60mph in just 3.6 seconds.

The ferocity under foot has been governed thanks to the eight-speed ZF automatic gearbox the engine is linked up to, one which offers a much shorter gear ratio than other Continental GT models. There’s also a brand new carbon exhaust system, which has been fine tuned to offer an infectious baritone roar as well as helping to shave 7kg off the overall weight. The boffins at Bentley claim that these alterations culminate to offer ‘the most dynamic and most responsive Bentley road car ever’.

Drivers of the model will be able to experience torque vectoring for the first time in a Continental GT, a system which allows torque to be displaced unevenly between the rear wheels to enable the car to turn more aggressively into bends, while also helping to reduce the rate of understeer.

The GT3-R is also said to offer a greater difference between its Drive and Sport modes, with the sport mode in particular designed solely for more spirited driving. The column-mounted gearshift panels have also been recalibrated, offering a far smoother operation as a result.

The GT3-R retains the same carbon-silicon-carbicide braking system, with 420mm discs at the front and 365mm discs on the rear wheels. Bentley claim that this system is powerful enough to absorb as much as 10 megajoules in one stop. It also features new 21-inch forged wheels.

While these adjustments and additions mean that the Continental GT is a fantastic performer on the track, the interior suggests that it still has the heart of a long-distance cruiser. While it certainly been tailored for a sportier look, the bespoke carbon fibre seats which are covered in black and green alcantara leather mean that the cockpit is a pleasure to sit in. The use of carbonfibre is also present on the centre console, fascia panels and doors. The centre console, sill treadplates and fascia on the passenger-side sport the unmistakable GT3-R badging.

Another similarity that it sports from the GT is the suspension, although both the air springs and dampers have been enhanced considerably from the standard setup.

Wolfgang Dürheimer, CEO of Bentley Motors, said the car had to be the most luxurious track-inspired Grand Tourer, helping to push the marque’s trademark combination of luxury and performance to a completely new level.

As already mentioned, orders for the Bentley GT3-R are already being taken, and while a price is yet to be confirmed, hopeful owners can expect to pay far more than the standard V8 S price of £139,000. Please contact us if your interested in one as we will have access to the first cars for sale.